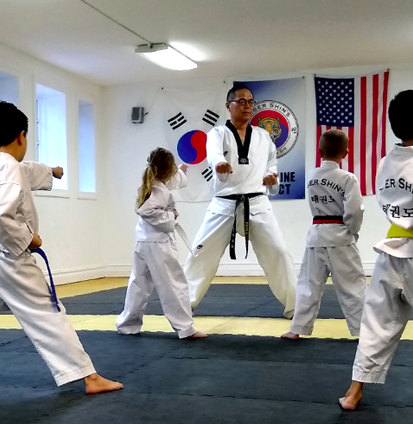 Master T.S. Shin was born in Pusan, Korea. Shin kwan chang nim has been a superior instructor since his youth. Training from a young age he became the captain of his high school taekwondo team, and as such felt it his moral obligation to protect and defend those students who would come under persecution of the school "bullies". Master Shin then became an instructor for both the Korean Army and U.S. Marines stationed in Korea.
After this Master Shin came to the United States and has been responsible for the instruction of thousands of students over the past thirty-seven years. Students trained by Master Shin have consistently risen above the crowd to be noted in different arenas. These students have brought attention to themselves because of their superior attitudes along with their notable physical skills. Master Shin's emphasis on the traditional aspects of taekwondo is what gives his students the proper attitude which in turn gives them their excellent physical capabilities.
Asked what is important in taekwondo students, Master Shin replied:
"The proper attitude and effort is most important. A master is applauded for his student's physical accomplishments, but he is remembered because of his student's respect for others and for the art of taekwondo"
13A Main Street Sparta, NJ, 07871 USA
Phone: 973-729-2299